When I finished painting work with my heavy allies infantry, next on my list was “Tommy Cookers”, the last unpainted axis support ­weapon. I decided to modify it, then I started to look for some ideas how to transform it. Several concepts, such as heavy sniper, mobile anti-tank gun on Opel Blitz or small bunker, I took into account. Finally I decided to rebuild model into anti-air gun unit. 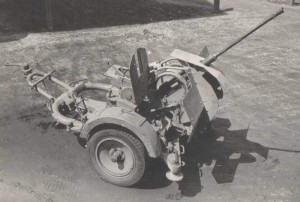 To be honest, I found very nice model which fitted to this concept. It was 1/48 scale 2cm FLAK 38 gun model produced by ACE company from Ukraine (www.acemodels.com.ue ). Model is relatively simple, few moldings made from white plastic.

Unfortunately the quality of the plastic isn’t perfect, so during cutting the parts modeler has to be very careful. Otherwise small parts could be broken. Nevertheless I’m pretty sure, that intermediate modeler should manage this issue. The manual is simple, could be more clearly arranged. The biggest benefit is the price 35 zł which means about 8,6 Euro.

Inbox photos are below.

Moreover I used bigger base & axis weapon set provider by Dust Studio, some styrofoam, a little gypsum and small gravel, and of course “Tommy Cookers” itself.

First of all I have glued the FLAK. There was only few elements which I didn’t use. It was barrel (no.23) replaced by axis anti-tank gun, support of barrel (no.20) replaced by self-made plastic support which fit to 75cm barrel from axis weapon set. Elements such as no. 40 and no. 26 I didn’t use at all. You may use photos of the manual to find parts which I mentioned. Unfortunately trolley hooks and support I have to made from wire due to mentioned quality of plastic. Parts just have broken when I tried to cut off them from molding. Nevertheless after two evening the gun have been ready to next phase.

Then I started work on basement. I used bigger one for walkers and styrofoam elements to create a kind of trench. I covered styrofoam gypsum pulp with small gravels. After few evenings basement was painted and ready. Additional I have added few bullet husks to add some reality.

Meanwhile FLAK was painted. I chose three colors for all AXIS machines (Vallejo – German fieldgrey 70830, Flat earth 70983, Field blue 70964) and of course I used these colors in that case also. Modification of the crew was the last step. One Heavy Recon has to be cut off and glued again but in different position. Body of the gun operator was rotated about 70 degrease relative to the legs.  I used two colors to paint Axis Heavy Recon’s (Gun Operator & Officer). As usual I used Vallejo paints, German fieldgrey 70830 as the main and Reflective Green 70890 to add some lighten.

At the end pigments and washes helped me to achieve final effect. 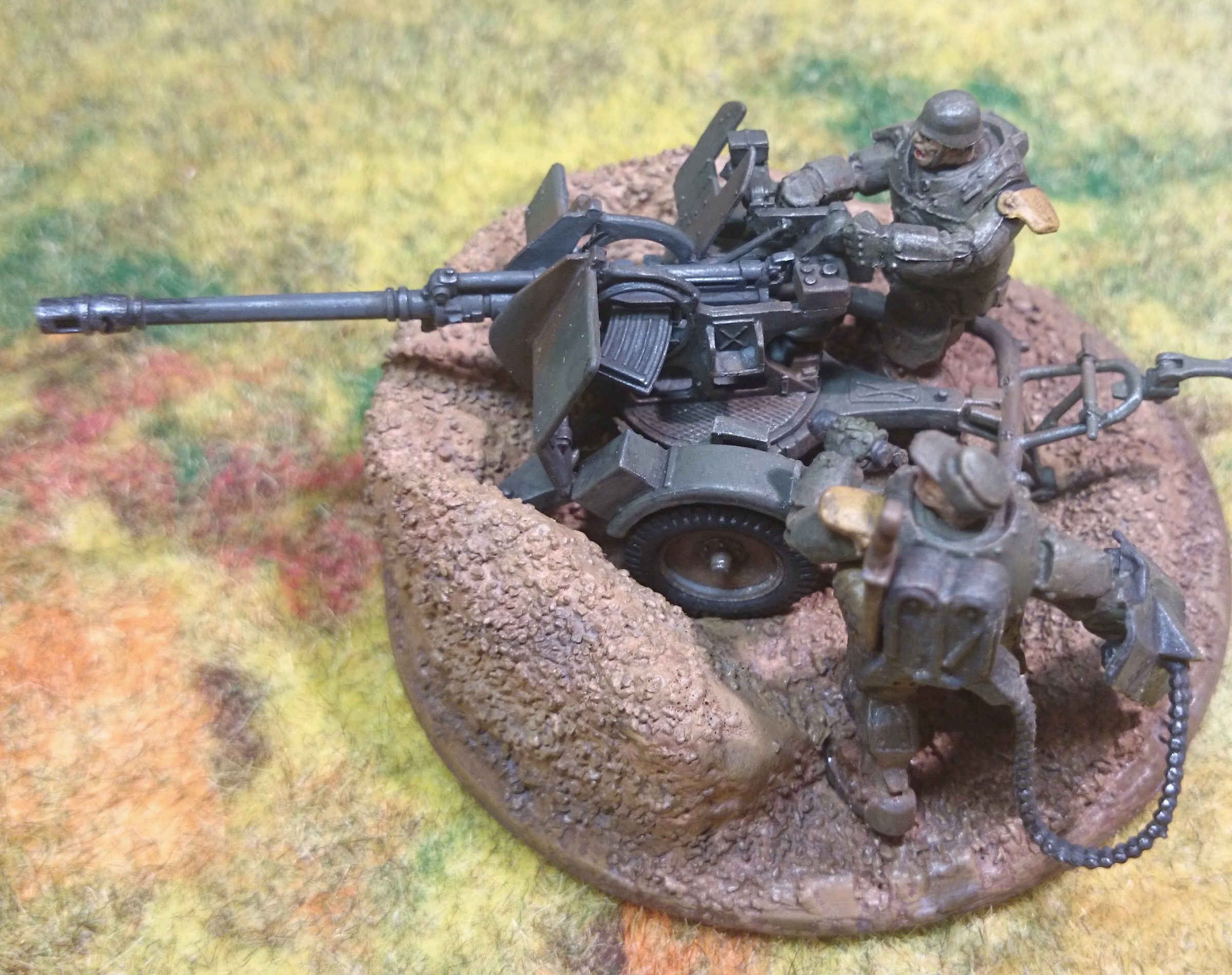 More photos in gallery below.

I play this model as the traditional “Tommy Cookers” usually. Nevertheless I have create customized card of Anti-aircraft gun. My model is called “Armored Deuce”. Reactive fire seems to be interesting benefit and of course ability to eliminate planes. You can download the card below. 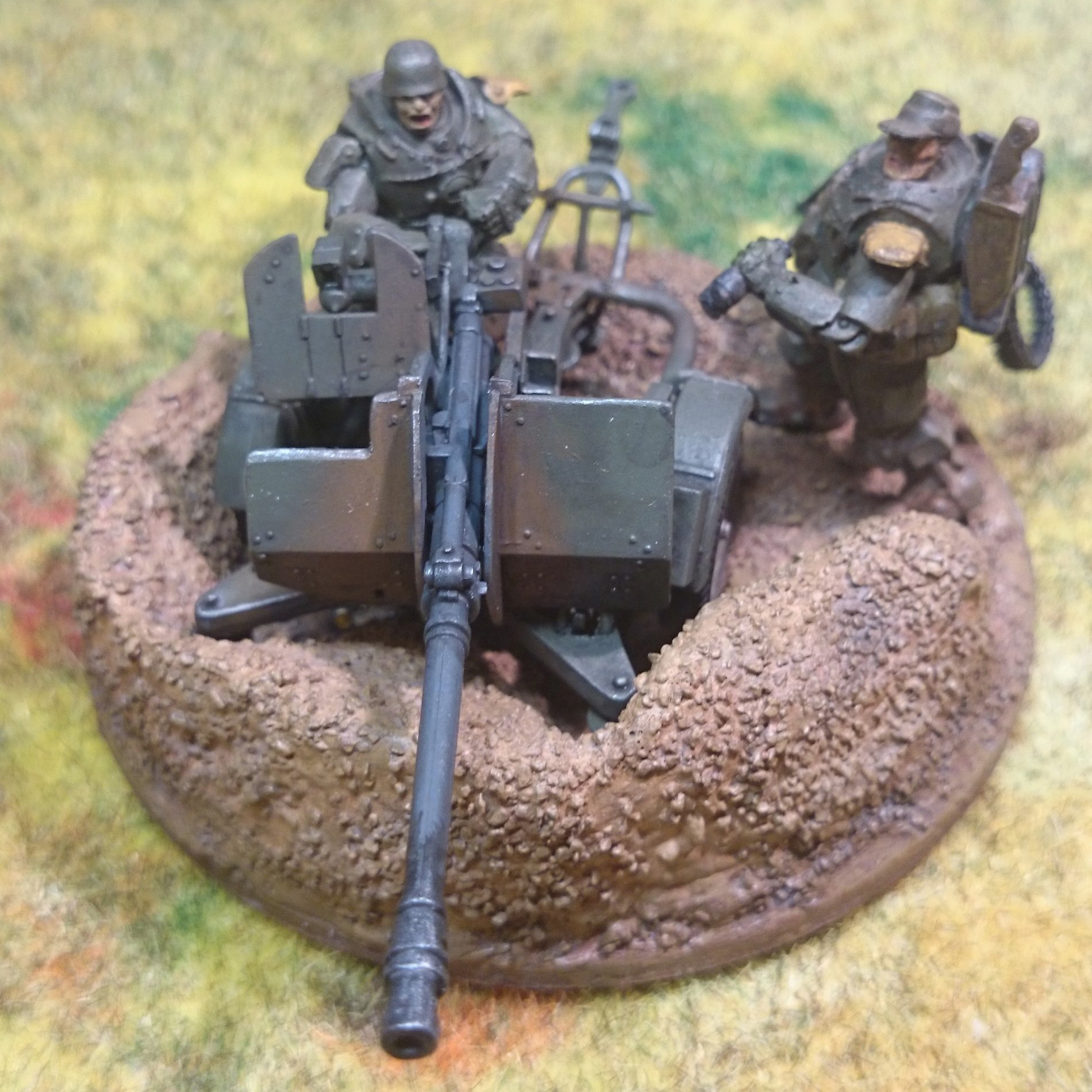 That all, I hope you like this model and article. Feedbacks & comments help me to improve my blog.